I began collecting Victorian pencils and associated writing equipment about 20 years ago, but other priorities took over, resulting in a several years hiatus. When i started up again a few years ago, I slowly began to expand the collection to include other interesting items such as ink bottles and pen nibs. Early pencils are still the primary focus, with some nearly 200 years old. The collection includes a variety of designs, manufacturers, and materials. Sampson Mordan items make up the bulk of the collection, but I’ve tried to acquire a wide selection of pieces from many other makers, both British and American.

In addition to the ink bottles and pen nibs, a much smaller part of the collection includes a variety of 20th century pencils in the “Vintage & Novelty” category. The few Parker pencils in the collection are only a small fraction of the offerings that Parker sold during the 20th century. Their “Duofold” range has a timeless appeal as most are just as beautiful and functional today as they were the day they were made, some over 100 years ago. The novelty pencils of the 1940’s-1960’s have had a similar appeal. Most were advertising give-aways or souvenir-type pencils. Not particularly high quality, and not particularly expensive at the time, but each creative in their own way.

In the summer of 2022 the YoreWrite! website was completely rebuilt. This update has significantly improved my ability to keep the information contained on it current, and more importantly, provided a number of new ways that viewers can explore the site. What you see on these pages is an evolving collection. For the time being I am simply the custodian/caretaker for these little bits of history before hopefully them passing on to someone else that is similarly interested. For now, I hope that you enjoy the new site and return on occasion to see what’s new., 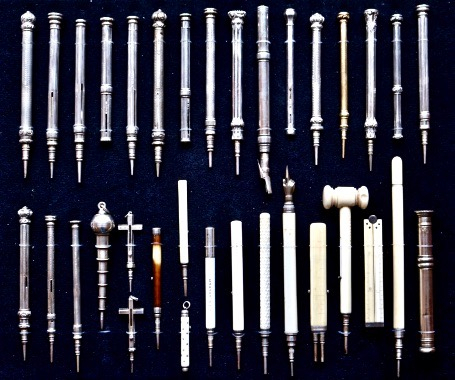 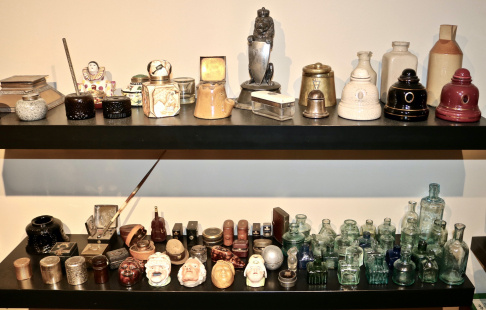 My grandmother kickstarted my collecting bug at the ripe old age of 5, when she gave me a World Stamp album and an envelope full of stamps from around the world for a Christmas gift. Eventually, Grandma and I both tired of the stamps and I moved on to coins. As my collecting interest shifted, Grandma shifted with me, and the next couple of birthdays included those little blue 1 cent and 5 cent coin collection folders and a few coins.

Since then my collecting interests have changed several times, to the point where I now consider myself a “serial collector”, locking onto something that interested me at the time, diving into it wholeheartedly and enjoying the thrill that came with each new addition. A string of collections have come and gone since the coins – pins, beer coasters, plants & winter hardy cactii, dead people (I did a family history that now includes over 1700 of our family’s ancestors.), floaty pens, Harley-Davidson poker chips, and now victorian pencils, and related writing accessories. Addictions run a little in our family, and perhaps collecting comes naturally to those of us with an addictive personality. Whatever the reason, I have enjoyed all of my collections, and in the process I have learned a lot about history, and the intrinsic value of everyday objects, the things we normally take for granted, or that we otherwise ignore in our busy, busy, lives.

While exploring the new world of collecting possibilities that the creation of eBay provided us with all this years ago, old pencils eventually caught my eye. Now well and truly hooked,  the variety of makers, designs, and the ingenuity of the engineering, has meant that I can take comfort in the fact that there will always be just one more example out there that I can’t live without..

Writing instruments of various forms have been around for centuries, but the history of mechanical pencils is relatively recent, with the first patent being filed by Sampson Mordan & John Isaac Hawkins, in England, in 1822. For those of us that had literate ancestors during the 19th century, non-oral forms of communication required paper, and a pen, a pencil, or a paintbrush. Pencils were far more portable than pens, which required spill resistant ink bottles, blotter paper, etc. Pencils could be used in just about any kind of situation, weather, writing surface, etc.

Antique pencils are interesting for many reasons, but thanks to the evolution of modern communication, they are also on the “endangered species” list of humankind’s tools. Up until just a generation ago (during the latter part of the 20th century) all of our long distance written communication was done with pen, pencil, or typewriter, and paper. Today’s techologies have essentially eliminated the need for these once vital tools and associated forms of written communication. How many of us have held an old letter or postcard written by our parents,  grandparents, or great-grandparents, and thought for a moment of what life was like “back then”? What was on their minds as they wrote the words, knowing it would likely be weeks before the recipient received them (if at all) and several more weeks before they got a reply? How much of what we know about those previous generations is owed to what was written down on paper? Will future generations have the opportunity to enjoy similar glimpses into their past (our “present”)? Hopefully …

For me, it is the act of collecting that is the most satisfying part of all of this, and any knowledge gained is a happy by-product of the process. While it is true that I’ve wandered significantly from just “old pencils”, the majority of the collection does fit nicely under the umbrella of “writing equipment”. Researching and learning about the various items; the manufacturers; the how & why of some of the designs; searching for specific examples of items; bartering for a particular addition to the collection; seeking out opportunities to expand or improve the collection; participating in auctions & antique shows; developing personal contacts, etc. are all part of the process that makes collecting fun… and yes, addictive. So now you know why I’m collecting old pencils (& other stuff). And in an oddly appropriate way, my grandmother has even contributed to this recent collection. This beautiful little rose gold & enameled magic pencil was one of Grandma’s prized possessions which was passed to my sister, who then passed it on to me many years ago.